You know it’s a pretty active weekend when the Save the Bay Swim from Newport to Jamestown is a side note!  Three hours after swimming across the finish line, I hopped on the ferry for a weekend of active relaxation and care-free times.

Wasted no time upon arrival on the Block.  Brother Nicko and other Nicko joined along on a mountain biking/hiking/swimming adventure.  We ended up riding and hiking to three different beaches on the South Side.  The highlight of the excursion was the crazy access to Second Bluffs (read at bottom).  This was basically a path created by water runoff that led down the face of the bluffs.  The way down was exciting but the way up was more intense and challenging.  Here are the well-earned vistas and some scenes from the days that followed: 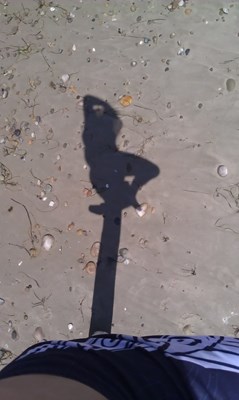 After a night of sensible indulgences, made my self familiar with the bike seat again and ventured out to the West Side to meet up with Cousin Jim.  We rode to the channel at New Harbor to see Nicko reel in a few scup and then decided to explore the beach on the south side of the channel.  CJ was telling me about “Born to Run” (which I still haven’t read!) and I was telling him about POSE running and the recent seminar I attended.  FF a couple minutes and we’re yogging along the tide line.  This only lasted a few minutes before the inner anti-runner and pro-heavy lifter sought more than just an 70-80% effort.  Thankfully, since we were on the primal playground, there were plenty of props for us to utilize.  We tossed around a few heavy logs before finding the one.  Roughly as tall as me (6’3 +/-) and about 10″ in diameter, “let’s take it back” I suggested looking back 1/2 mi. to the old coast guard tower.  Admittedly, there were a couple minutes of silent procrastination, then CJ broke the tension with a solid deadlift and log jog.  We traded off a few times before kicking it up a notch.  For the last 300-400 yds we decided to do all out sprinting efforts with our driftwood!  The ad-hoc terms required selling out completely and dump the load once there was a drop-off.  The non-carrier had to keep pace for an active rest/encouragement interval. 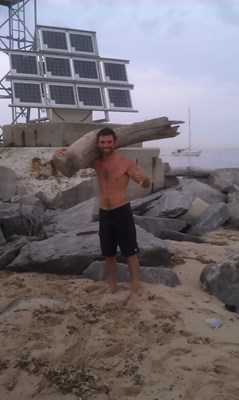 Day 3 – The weekend workout finale picked up where we left off at Coast Guard.  After LL and I took a semi-unplanned 4 mile walk, CJ and I still had a little left in the tank and got dropped off at Mansion Beach for some freestyling.  We ran, swam, climbed dunes, carried grown-up logs, and hurdled sandcastles for a couple miles before capping it off with a heavy stone carry at the sandy finish line behind McGovern’s Yellow Kittens!  Since we were still on island time, we decided it was a great opportunity to get our 20% ratio in!  This week will involve some IF as a result, but no regrets here.  Proof again that you can’t “exercise off” too much fun, but you can use your surroundings to have the healthy kind!