Toughest Mudder Philly - What a Ride!

It's been over 3 weeks since Toughest Mudder which means the high is gone but the memories still make me smile! I definitely want to document this experience as it was a pretty badass 30 hour block of time (and a very cool way to celebrate my 35th birthday) - only 8 of which was spent on the course. So here goes...

Spoiler Alert: the toughest part of this whole experience was the driving. Of the 30 hours spent on this adventure, approximately 14 were in the car. Throw in a cranky hamstring that doesn't like sitting, and yes driving was the most painful part of the weekend.

We left Warwick, RI at 11am on Saturday and settled on a K-mart parking lot about 20 minutes away from the venue. We loitered there from 530-730pm where we snacked, tried to rest, and did our best to avoid the parking lot security. 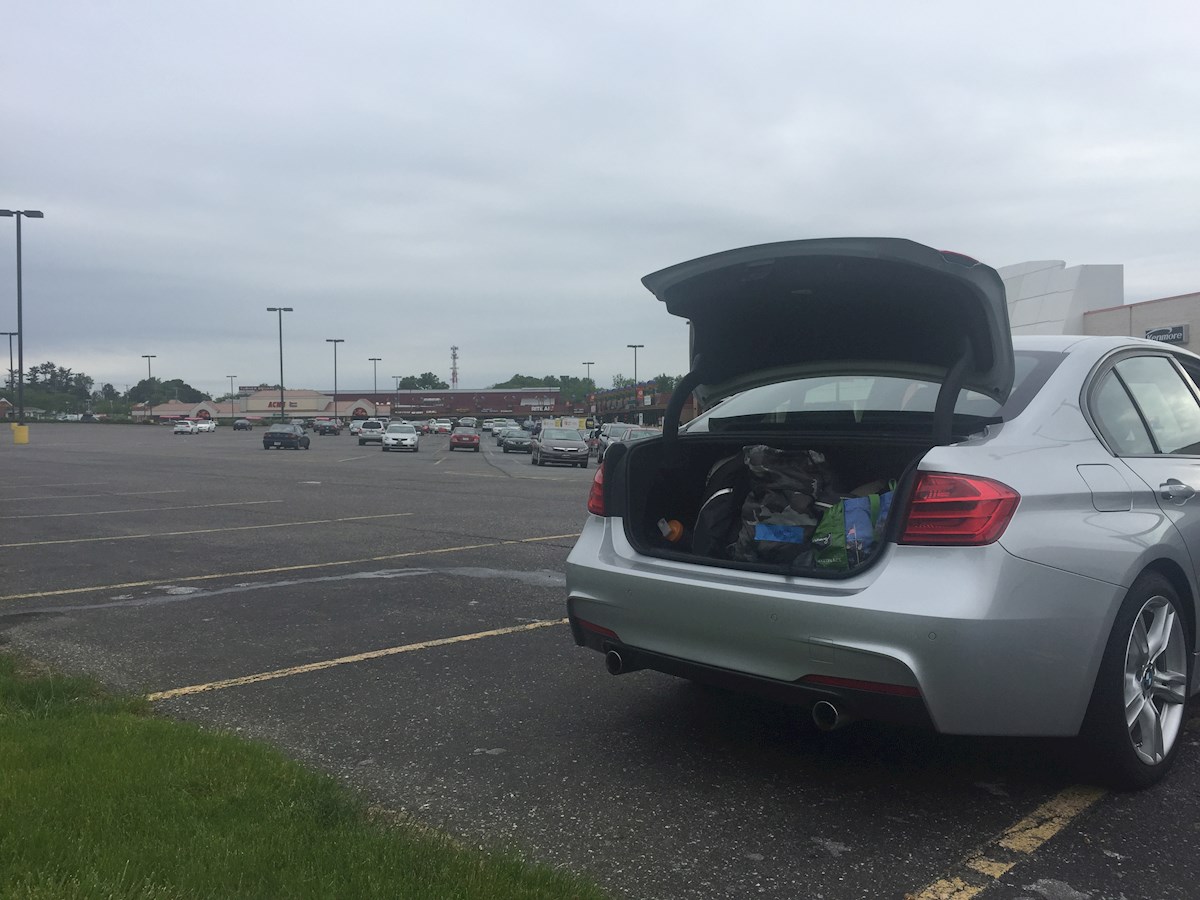 We arrived at Plantation Field around 8pm and hiked up the big hill to the registration area. There was a bit of a wait to register but we all chilled out and did our best to relax. Checking in was pretty smooth and since we got in line early we got a nice spot in the Pit.

The Pit was buzzing with nervous excitement and second-guessing. We couldn't help but notice that lots of mudders were lightly dressed. "I'm sticking with the plan" was my response to the final question of "are we going to be too warm?" Turned out to be the right call as temps started in the low 50's and only got colder from there. We also saw lots of those same people shivering under emergency blankets during the night. While we could have been more organized (next time we're going with clear plastic totes instead of dark duffel bags), it worked out. 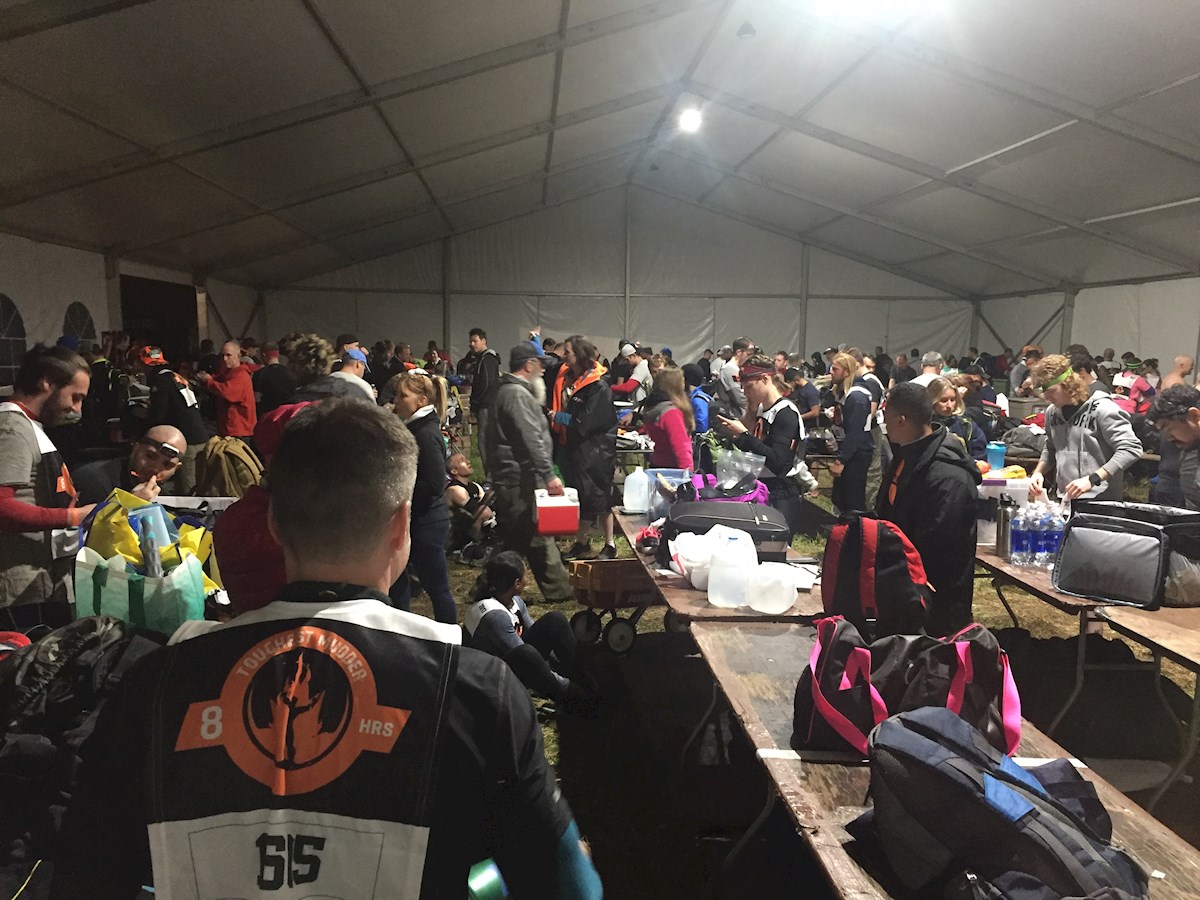 So here's a quick recap for you of what I did and how it worked for me...

Tapering: You already know that I love rest week! Leading up to the event I took it easy except incorporated a new "grip confidence" strategy where I did a quick 2 min workout daily - dead hand for 10 seconds then do a pullup every 10 seconds for 2 min. It was definitely easier by Friday which made me feel strong but still well rested.

Gear: Not cold enough for the full wetsuit so I went with a 1-2 mm swim skin I bought about 10 years ago and used twice (2013 WTM and this weekend). I also wore a 5mm diving hood for laps 2-4 and 2mm scuba gloves almost the entire time (took them off at Funky Monkey and Hang Time) - totally the right call again as my hands stayed pretty warm and clean throughout. Merrell All Out Crush sans socks. These things are fantastic! Also I wore my camelbak (without bladder) for food, contacts, and temporary glove storage.

Food/Drink: I made 5 sandwiches in the parking lot that were perfectly delicious and satisfying - 1 pc of sourdough bread + 1 TBSP almond butter + 1/2 banana + salt. I ate all five of them in the Pit throughout the night and also had a few of Fit Rick's honey stingers (honestly I'll do more of these events just to eat those things, damn they're good!). Drank water in the pit and probably had 16-20 oz of coconut water throughout the night as well. That's it and I felt like it was plenty.

Mantra: Often people refer to me as "fearless" which is totally untrue. I was fairly cool on the surface but a mess inside during the ride, as well as every time I approached Funky Monkey and Hang Time. I practiced positive self-talk over and over: "I'm strong, skilled, efficient, and tough!" Combine that with a few deep breaths (you'll hear them in the video below, #breathemotherfucker) and it worked!

The Course: Big Mudder warned us that this was going to be the most difficult Toughest Course yet due to the elevation gain and obstacle density. It turned out to be the case since the winner "only" did 40 miles (previously all have been 50) and much fewer participants hit 25 miles even though they had more enter the event. Here's the course map: 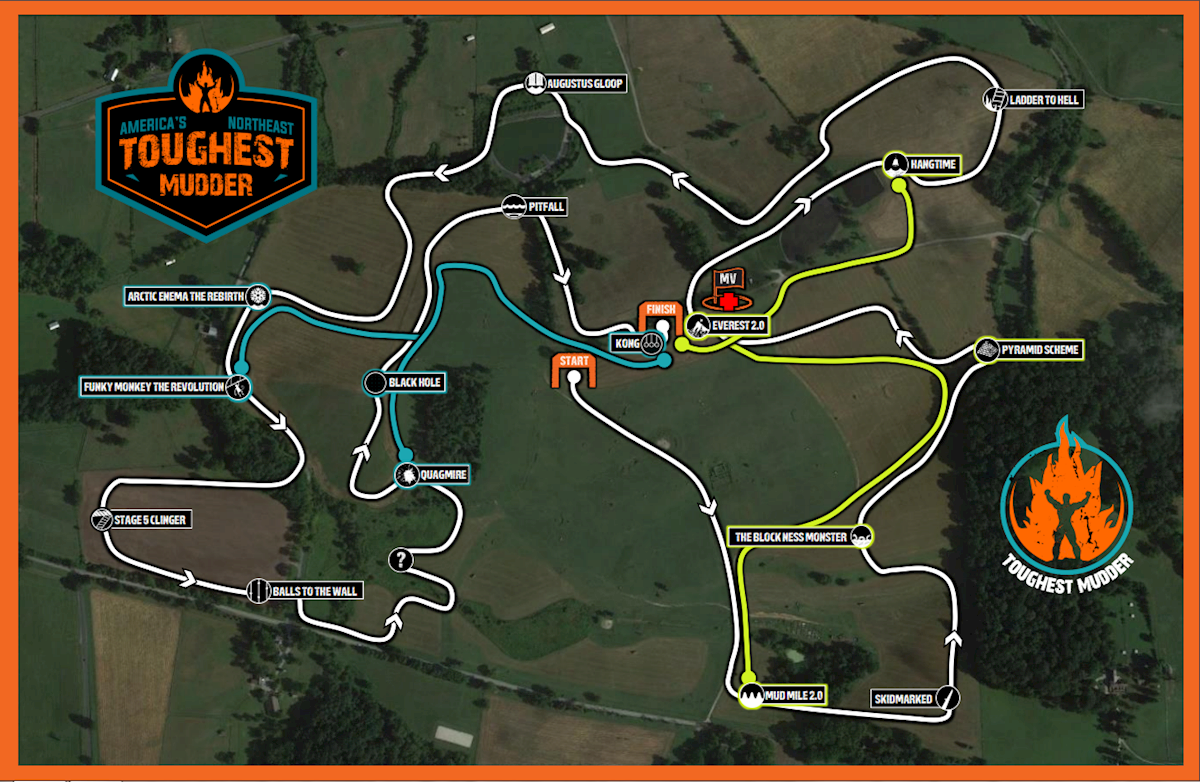 Mud mile was thick and underrated as always.

Skidmarked was no sweat but got quite slippery over time as we wiped our muddy bodies over it coming from Mud mile.

Block Ness was a blast as usual! Luckily we always timed it where other people were around to help out.

Pyramid Scheme was cool since they dangled ropes down for us which allowed for a solo ascent.

Everest 2.0 was practically impossible to do solo since it was super slippery. We got help or used the rope from Grappler when it was available. So far I'm 1 for 1 on that - woohoo!

Hang Time was so badass! It was definitely my favorite mostly due to the nerve factor and it was fun sliding down the high tension wire after making it through the cargo net.

Ladder to Hell was quick, easy, but cool.

Augustus Gloop was pretty fun but I was slow on it.

BM went easy on us for Arctic Enema as I'm pretty sure they didn't refill the ice over night. It was a nice cleansing dip.

Funky Monkey 2.0 is also so badass! I failed my first attempt because I didn't see the final traverse bar and dismounted from the last ring - made it to the platform but couldn't hang on and fell back into the water. When I popped up I was confused at first but then exclaimed "oh there's a bar there!"

Stage 5 Clinger was fun. It was a quick side power traverse to a pullup reach to a tootsie roll on the platform.

Balls to the Wall was the official cramp-inducer of the course. Swinging my leg over during lap 3 was probably the worst all night.

The Mystery Obstacle was Operation. This was one of my favorites for sure. The first time we approached it we saw people dropping their poles and screaming when they got zapped. Luckily we both made it through all night shock free!

Quagmire, Black Hole and Pitfall were uneventful but broke up the running.

Kong was sweet! I played it safe and used the forearm technique every time.

Cramping: I am convinced that dehydration/electrolyte imbalance has nothing to do with cramping (at least for me). Unfortunately I have a history of debilitating spasms during events and haven't found the solution...until now? At the start of lap 3 I felt both of my pectineus muscles knocking pretty hard. "What the f*ck! Seriously?" I willed them away and ignored them since it was way too early for that and I had 15 miles to go. Well, that didn't really work so I pretty much suffered through the 3rd lap. After doing versions of the sumo/scarecrow walk/run, I went with something that worked for me during the Verified Badass Challenge last year: Arbonne Pain Gel. It's pretty much all natural icy hot (which may also work) that I rubbed liberally on the spazzy muscles (they traveled from inner thigh to hamstring to quads). While it burned almost as bad as that stuff applied to me on the eve of becoming an official brother in my college frat, it worked! Plus I think the intense burning took my mind off of the spasms (#breathemotherfucker). Lap 4 was our fastest lap and Lap 5 was pretty much cramp-free! Side note: I did shoot some mustard here and there and I believe that helps a little, but it only lasts so long. That gel has some serious staying power!

"Suffer mode": There's something about that steady state of pain and discomfort that makes these events so special. It sounds masochistic but I got to "go there" for a while and it was fantastic! Why? Because it doesn't last forever and the reward you get from coping with it all is totally worthwhile. I'm still looking for an appropriate term to describe that state; being on autopilot while feeling a combination of fatigue, pain, numbness, determination, etc. Let me know if you come up with something!

Sunrise: Without a doubt the highlight of the experience was the beautiful sunrise over Plantation Field! It totally warmed the soul as the view was amazing and we could see all of the hazards we were trying to avoid under the faint light of our headlamps (I totally need a more powerful one).

Victory Lap: We started our last go 'round at 0635 which left us plenty of time to hit that 0830 deadline (our average lap time was 90-100 min). Well, we cut it pretty close! Unfortunately Fit Rick was dealing with some hardcore IT band pain (although he barely let on cuz he's a total badass) which meant instead of running the downhills we took them slow. We noticed that lots of people were taking it slow so we didn't have a huge sense of urgency...until the last mile or so. We picked up our pace as best we could and finished at 08:27:30. Ha!

Overall an awesome night and I am definitely doing another one! The experience has left me yearning for another 24-hr adventure, but I don't think it's happening this year.

The drive back was as expected - an achy hamstring and a struggle to stay conscious for the driver. Somehow I got screwed since I got to take my nap on the GW bridge in NY. To say that driving in that traffic was restful would be a stretch (as compared to Fit Rick who got to nap on the smooth byways of CT). Unfortunately we also failed to find a swimming hole which is usually an integral part of the ride home. We tried twice but I couldn't get myself to jump into the murky river in New Brunswick, NJ. I guess that says something after what I had previously gone through! 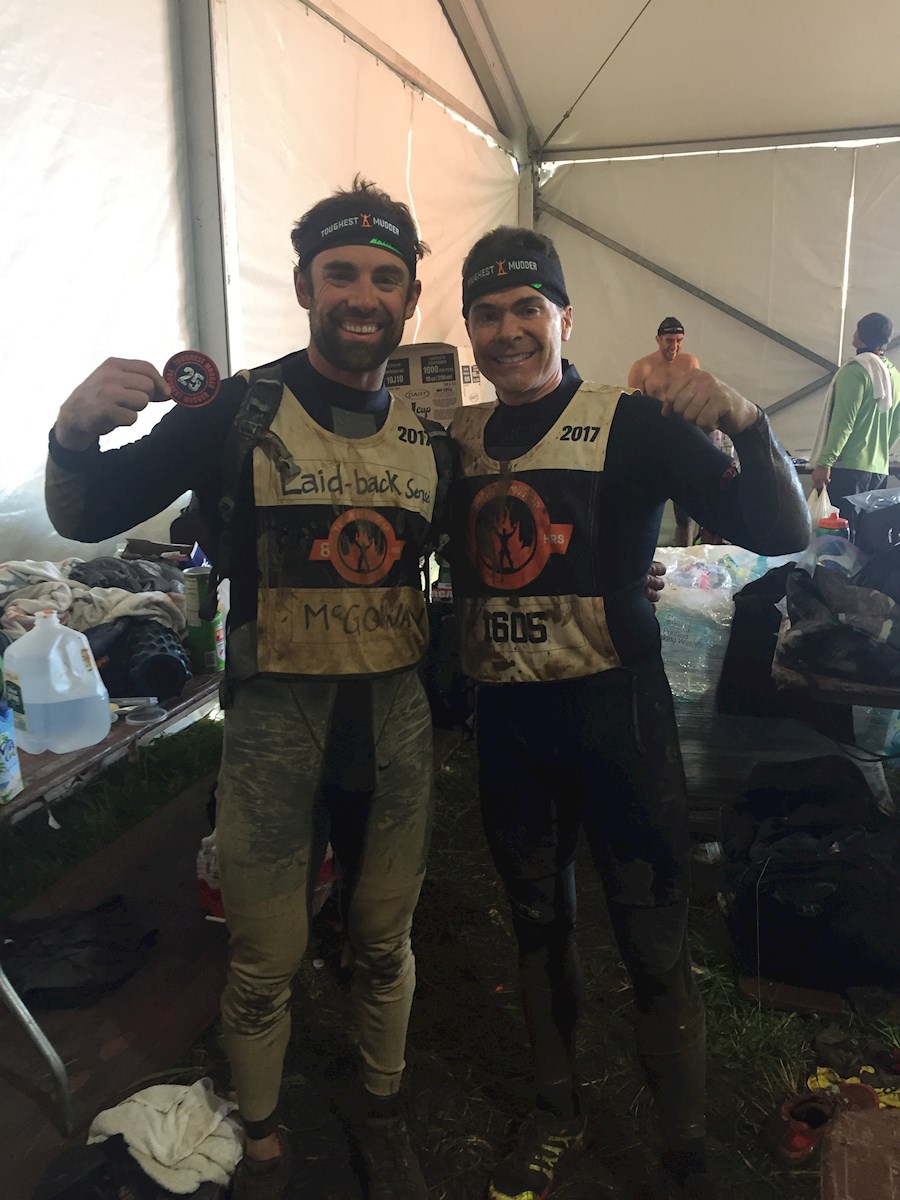